Chia pudding with honey and mango puree for babies 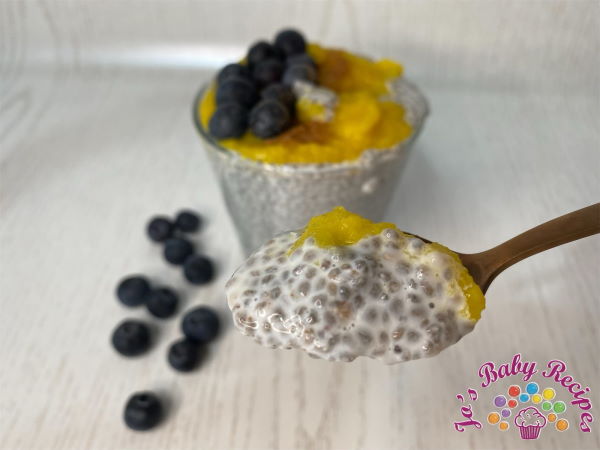 Chia has entered my kitchen quite recently. The first experience with her was not a memorable one… at least not in a good way… But I said to try again though (as an aside, when children refuse a food, refuse categorically!!, do not insist, leave them as they want, and return to that food in some time, that their taste changes)

I saw in Anca from BebeMananca.com this version of chia pudding and because it is easy to do, on the principle of what I had and what I lost, I gave her a chance. Vaaai!!, how good it is!! You have to try it! It will change the perception of chia pudding

I mixed the milk with the chia and left it to hydrate overnight in the fridge.
The next day I mixed with cinnamon and honey.
I put a mango in the blender to get the puree and put it over the chia pudding. I added some blueberries.

It can be served as a snack or as a breakfast. However you choose to do it, you will fall in love with this quick and tasty version (not to mention nourishing!!) of pudding.
I'm waiting for your opinion when you try it!

Kisses and spores in the kitchen!

This website uses cookies to improve your experience while you navigate through the website. Out of these cookies, the cookies that are categorized as necessary are stored on your browser as they are essential for the working of basic functionalities of the website. We also use third-party cookies that help us analyze and understand how you use this website. These cookies will be stored in your browser only with your consent. You also have the option to opt-out of these cookies. But opting out of some of these cookies may have an effect on your browsing experience.
Necessary Always Enabled
Necessary cookies are absolutely essential for the website to function properly. This category only includes cookies that ensures basic functionalities and security features of the website. These cookies do not store any personal information.
Non-necessary
Any cookies that may not be particularly necessary for the website to function and is used specifically to collect user personal data via analytics, ads, other embedded contents are termed as non-necessary cookies. It is mandatory to procure user consent prior to running these cookies on your website.
SAVE & ACCEPT